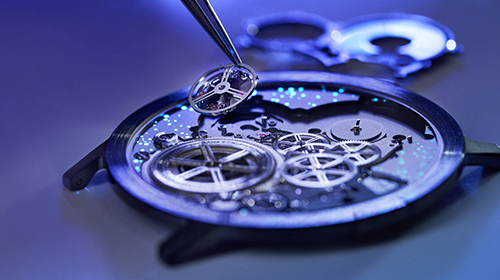 Piaget unveils a unique Altiplano Ultimate Concept (AUC), a beacon of technology and design which pays tribute to the first “beats” of this ground-breaking timepiece.

The Altiplano Ultimate Concept started as an idea, a vision, a dream. Not everyone believed it was possible, but the philosophy at Piaget has always been to always push existing limits. Engineers, watchmakers and designers continued to search for solutions to make the dream come true and after four years of research and development, on 7 February 2017 at 7:47pm, the AUC took its first “beat”.

The AUC was first presented in Geneva at the SIHH in 2018 to huge acclaim from the watch community and the world’s press. Only two years later, Piaget made it reliable for everyday wear. In April 2020 the first timepiece left the Piaget workshops for the big wide world, and in November of the same year, the timepiece won the “Aiguille d’Or” prize from the Grand Prix d’Horlogerie de Genève.

Most timepieces are made up of four layers: the bezel and crystal; the dial and hands; the movement; and the caseback. Piaget removed this four-layer construction to create a fusion of components with the bridges, dial and hands on one side; and the caseback, movement, mainplate and bezel on the other, all coming together as one. This fusion of watchmaking construction features five patents that have enabled the Maison to create a timepiece that is a mere 2mm thick.

This one-of-a-kind creation is a celebration of the AUC adventure with several stylistic details that recall this incredible journey. Starting at the top of the dial, the Piaget logo is in a historic font that is the same typeface used in the logo above the Manufacture in La Côte-aux-Fées, the village where Piaget was born and remains active today. Two enlarged circles sit among the dots of the minute ring, marking the time – 7:47 – when the AUC first came to life. Between 2 and 3 o’clock birthday of the AUC – 7 February 2017 – is inscribed in a small window. And a “La Côte-aux-Fées” inscription has also been engraved onto the ratchet wheel along with the Manufacture’s GPS coordinates. Completing the tribute, the dial background features stars illuminated with Super-LumiNova that replicate the sky above La Côte-aux-Fées at the exact date and time of the AUC’s birth.

This timepiece comes in a 41mm case made of a high-tech cobalt-based alloy. This bold choice of material is in perfect harmony with the dark slate-blue PVD base plate, which has been sandblasted. The caseback, bezel and lugs have all been satin-brushed, making a nice contrast with the polished caseband. The timepiece is paired with an extremely thin dark blue alligator strap measuring a mere 1.5mm thick, in keeping with the watch’s ultra-thin design.