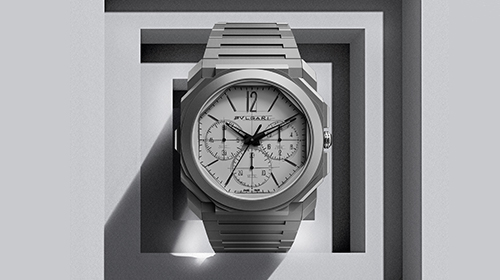 In ten years, the Octo collection has made its mark on the world of Haute Horlogerie with its technical prowess, its iconic shape and its unmistakable monochrome style. Both pure and contemporary, it embodies the dual identity of Bvlgari watches: a blend of rigorous Swiss watchmaking and Italian elegance. This refined and understated masculine interpretation has forged its reputation among both watchmaking experts and fans of minimalist design matched by absolute technicality.

To celebrate this icon of slimness and style, the House unveiled two anniversary editions that go back to the roots of its conception: the first sketches made by Bvlgari’s Product Creation Executive Director, Fabrizio Buonamassa Stigliani. Pencil sketches that a few years later would give life to the unmistakable Octo Finissimo line and today adorn the engraved dials of two flagship models – Octo Finissimo Automatic and Octo Finissimo Chronograph GMT Automatic – crafted in titanium.

These feather-light monochrome anniversary models fully express the Bvlgari approach to masculine elegance and pay tribute to two emblematic timepieces in the Octo Finissimo saga. Presented in 2017, the Octo Finissimo Automatic, the thinnest ultra-thin watch on the market, set the third world record for the collection, with a total thickness of 5.15mm housing a movement equipped with a micro-rotor and measuring just 2.23mm. Two years later, in 2019, the Octo Finissimo Chronograph GMT Automatic made its own mark with a fifth feat of extreme miniaturisation for the thinnest mechanical chronograph with GMT function in watchmaking history, at just 3.3mm thick.

Embodying the aesthetic signature of the Finissimo collection, the case, dial and bracelet are crafted from ultralight titanium, ensuring a modern look and peerless elegance. The strong and bold lines of the case, inspired by Italian architectural masterpieces, express Bvlgari’s Roman roots, while the play of light in its facets catches the gaze. The sandblasted finish of the titanium contrasts with the black PVD-treated hands, the hour-markers, the Bvlgari logo and the engraved small seconds counter, reproducing Fabrizio Buonamassa Stigliani’s early sketches. The overall effect combines perfect legibility with an original style. Topped by a ceramic-set crown, the sleek 40mm-diameter case is teamed with a smoothly integrated bracelet composed of supple links, prolonging the sense of comfort and lightness on the wrist.