Roger Dubuis | A new tribe lands as an icon ascends 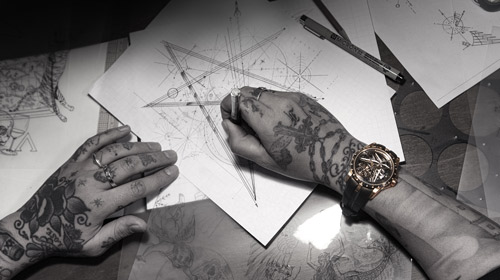 Since its creation, Roger Dubuis has never ceased to display its affinity for extravagance and impertinence. A true innovator, the Geneva-based company is driven by an irrepressible desire to propose striking ideas, ever more innovative technologies and avant-garde creations. It is proving this once again by presenting the new Excalibur Flying Tourbillon.

The future of Hyper Horology is here

Extravagant, determined and disruptive, the bold and bright are the ones that stand out. Just like any star should. But a star doesn’t just appear. It takes dedication. Innovation. Craftsmanship. Only then can an icon ascend… Introducing the Excalibur Single Flying Tourbillon: a star restyled for the new world. To mark the launch of the inimitable skeleton design reinterpreted with a contemporary touch, Roger Dubuis is set to celebrate modern art in all its shapes.

Finding kinship with those disruptive souls who dare to make a difference, the Maison partners with the Urban Art Tribe, world-famous urban culture artists that reflect Roger Dubuis’ values: break the rules, showcase radical expertise and obsess daily over the design of the future.

Roger Dubuis continues shaking up the world of haute horlogerie with the launch of the new Excalibur Single Flying Tourbillon. Enhanced with meticulous care, the timepiece is reinterpreted with sophistication and flair using modern and technical materials.

A contemporary masterpiece for the wrist, the new design showcases clean-cut lines on both case and movement. Creating the impression of a thinner look and feel, while heightening the sense of transparency and depth, the calibre is rebuilt from bottom to top in an architectural feat that sees the Roger Dubuis star now levitate freely above the barrel. A strong visual identity is created with a signature two-line pattern – seen between the notch on the crown and bezel, the star’s arms, the tourbillon’s cage, the hour’s marking on the flange, the hands – all of which cleverly appear as though they will meet but never do. This dynamic aesthetic is amplified by the Poinçon de Genève, the most demanding signature in fine watchmaking and one that requires the manual decoration of each and every component of the watch, as well as unexpected and antinomic decorations in modern haute horlogerie, such as circular-brushed top surfaces and polished angles that demonstrate Roger Dubuis’ visionary approach.

Always keeping the wearer in mind, the new RD512SQ calibre is stunning in its technical prowess. Now with a titanium lower tourbillon cage and a mirror-polished Cobalt Chrome upper tourbillon cage, the weight of the piece is reduced to optimum effect. All of which allows the power reserve to be radically optimised to 72 hours. Proving no detail goes unconsidered, non-magnetic material is used inside the tourbillon to better serve the wearers and improve their experience.

Comfort is key, which is why a range of entirely new strap sizes have become available. With five sizes, finding the perfect strap ensures the buckle is always centred on the wrist, as a Quick Release System offers ultimate flexibility. Underscored by rarity, the 42mm case is only available in 88 pieces per colourway.

The art of glow

Showcasing the Maison’s obsession with art, light and luminescence, in addition to the icons of the band comes the Excalibur Glow Me Up, a world-premiere for Roger Dubuis limited to just eight timepieces.

By day, the new Single Flying Tourbillon calibre is elegantly adorned with 60 baguette-cut diamonds on the bezel. By night, it’s a complete different version that comes to life through this vibrant timepiece with luminescent and dazzling diamonds, an achievement made possible thanks to an intricate two-part process. The first involves filling the grooves that hold the stones in place with Super-LumiNova, a singular way to make the diamonds appear luminescent without altering them. Secondly, an additional patent enables Super-LumiNova to be applied on the angles of the movement, as well as to the iconic star-shaped bridge.

Art in the making

Roger Dubuis is a destination for the avant-garde. Committed to non-conformity, the Maison stands with those who choose to blaze their own trail. Roger Dubuis thus partners with the Urban Art Tribe, composed of two urban culture creatives – tattoo artist Dr. Woo and graffiti artist Gully. Rule breakers in their own fields, they too shape the future by refusing to take ‘no’ for an answer. Brought together to unite a wider community of daring minds, Roger Dubuis and the Urban Art Tribe hope to encourage people to challenge the way things are, just as the Maison does when it comes to Hyper Horology, and Dr. Woo and Gully do in their industries.

A leading name among an influential elite who see tattoos, art and fashion as an indissociable whole, Dr. Woo’s singular approach to needle style has shifted the paradigm for tattoos, taking them from subculture to broad popular appeal.

Gully, a well-known graffiti artist, chooses to work exclusively in his own atelier to maintain his anonymity. He uses a wide variety of mixed techniques and materials and explains his artistic concept as one based on conscious appropriation. Telling visual stories of children appearing in splendid settings, he reveals their enchantment with art and particularly with the paintings of the great masters.