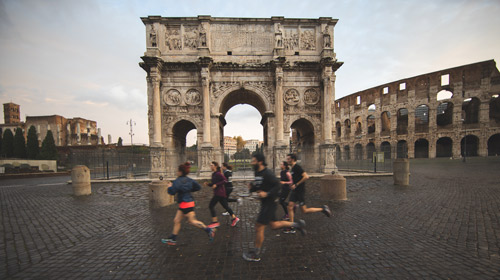 Maurice Lacroix continues to conquer cities by combining the precision of its watches with the legendary image of the marathon in Rome, which will take place on September 19th.

More than 10,000 runners will race through the streets of Rome with more than 1.2 million supporters cheering them on. The ACEA Run Rome The Marathon is by far the most popular in Italy, ahead of Florence and Milan. “ACEA Run Rome The Marathon” (under its official name) is an extremely inspiring event where the athletes race through the city, passing its historic monuments, each more impressive than the last: the Baths of Caracalla, the Basilica of Saint Paul Outside the Walls and even the Piazza di Spagna… What could be more motivating for an athlete than to run through a picturesque location representing more than 2,000 years of history?

Additionally, the competition has been able to renew itself. From this year, the event is adopting a new name as well as a redesigned visual identity. More modern, focused on connectivity and offering new activities allowing both beginners and more experienced competitors to take part, the ACEA Run Rome The Marathon is a resolutely innovative race with an international outlook.

The competition is divided into three categories: the “ACEA Run Rome The Marathon” 42-kilometre race through the city, the “ACEA Run4Rome Relay” event which takes place in teams of four and the “Fun Race”, a virtual event that allows families and friends to run 5km wherever they are.