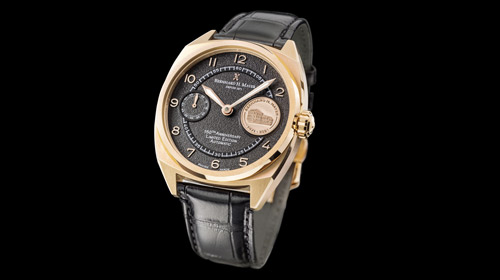 Founded in 1871 in Pforzheim, Germany, by Bernhard H. Mayer, the eponymous brand is celebrating its 150th anniversary and paying tribute to its origins with the launch of two limited-edition timepieces.

Formerly specialised in precious metal engraving, the brand now based in Biel/Bienne began making watches in the 1980s. Presented last May, the anniversary collection features a personalised commemorative medal on its dial, echoing its numismatic roots.

Available in two versions, pink gold-plated steel and stainless steel, the special edition is inspired by the great classics of Geneva watchmaking and radiates a strong personality expressed through every detail and curve. The medal set at 3 o’clock represents the historical Mayer factory in Pforzheim. The transparent caseback reveals the Swiss self-winding movement and the oscillating weight stamped with the “150th anniversary” logo.