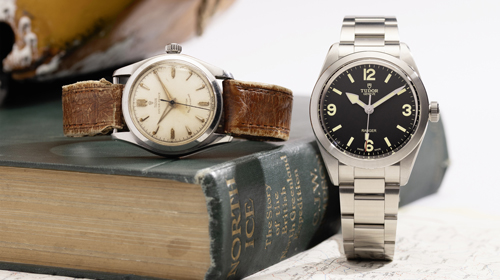 To mark the 70th anniversary of the British North Greenland Expedition, Tudor is presenting the Ranger model, a tool watch celebrating the spirit of this daring adventure.

It was on 8 July 1952 that the British North Greenland Expedition left Deptford, an area on the banks of the Thames in London, for a two-year scientific mission studying ice sheets in Greenland. Equipped with the brand-new Oyster Prince model, Tudor’s first watch that was both automatic and waterproof, the members of the expedition, mainly British scientists and sailors, conducted in-depth glaciological and seismic surveys at several sites. The watchmaking house also asked them to gather performance data for the 30 Oyster Prince watches that would be worn under extreme conditions.

The new Ranger model respects the aesthetic standards established in the course of its history, especially its dial with Arabic numerals at 3, 6, 9 and 12 o’clock, whilst incorporating new state-of-the-art technical elements, in particular a high-performance Manufacture Calibre and a Tudor “T-fit” clasp with rapid adjustment system. It continues, within the Tudor collection, the tradition of the expedition watch, born with the Oyster Prince watch used by the members of the British North Greenland Expedition. It embodies the tradition of a robust, practical and affordable instrument.

To echo this functional heritage, the 39mm case and the bracelet of the Ranger are satin-brushed, creating an overall matt finish, in the purest spirit of a “tool watch”. Some elements, however, are polished to strengthen the lines of the case, including the inner edge of the bezel. As for the dial, an attentive eye will notice a detail of historic influence, hour-markers painted in luminescent material. Beige in colour, they perfectly contrast with the grained, matt black dial and match the tone of the Tudor shield logo and inscriptions. The arrow-shaped hands, rounded for the hours hand and angular for the seconds hand, are characteristic of Ranger aesthetics, with a novel touch, the tip of the seconds hand in burgundy.

The Ranger model is equipped with Manufacture Calibre MT5402. Its construction has been designed to ensure robustness, longevity, reliability and precision due to its variable-inertia balance, which is held in place by a sturdy traversing bridge with two points of fixation. Thanks to this balance and the non-magnetic silicon balance spring, the Calibre MT5402 has been certified as a chronometer by the Official Swiss Chronometer Testing Institute (COSC), with its performance going beyond the standards set by this independent authority.

Another notable feature is that the power reserve of this mouvement is “weekend-proof”: that is to say about 70 hours, which enables the wearer to take the watch off on a Friday evening and put it back on again on Monday morning without having to wind it.

Since its creation by Hans Wilsdorf in 1926, and in line with his vision of an ideal watchmaking product, Tudor has never stopped producing the most robust, durable, reliable and precise watches in existence today. Bolstered by this experience and confident in the superior quality of its watches, especially those tested on the ice fields of Greenland, the watchmaking brand offers a five-year guarantee for its entire collection. This guarantee does not require the watch to be registered or submitted for periodic checks and is transferable.