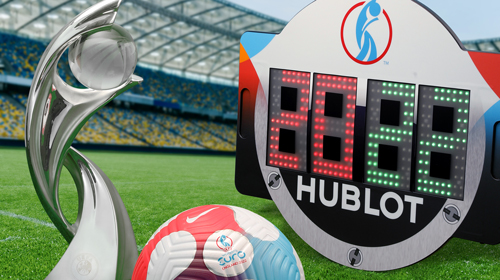 Hublot has been supporting football since 2008... on the pitch, through its competitions and athletes, both male and female. After the UEFA Champions League final, the watchmaking company closely followed the Women’s Euro which took place from 6 to 31 July in England. The programme included 25 days of football, 16 teams, 10 stadiums and a Wembley Stadium final between England and Germany.

Following the example of its role as sponsor for UEFA’s men’s competitions, Hublot has worn the colours of women’s football since 2015 by supporting the FIFA Women’s World Cup in Canada and since 2020, the Women’s Champions League, Women’s Under-19 and Under-17 and finally the Futsal Euro Women’s champions League, the indoor hard-court football tournament.

These sponsorship deals confirm Hublot’s commitment to the sport’s values and the inclusive spirit of football. Through its commitments, the brand also champions the values of the Together #WePlayStrong campaign, which fittingly aims to develop women’s football in Europe. The watchmaker carries this commitment onto the pitches, with its two friends of the brand – Ada Hegerberg & Alexia Putellas.