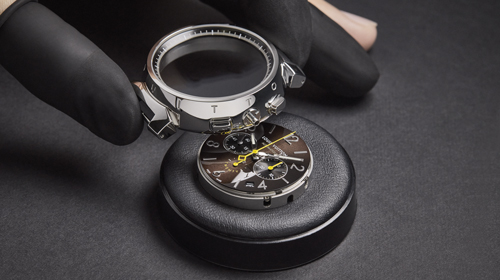 In just two decades of watchmaking, Louis Vuitton has proven its deep passion for watchmaking, and has made quite a name for itself within the industry. In 2002, the Maison unveiled a watch like none other: the Tambour. Bold and innovative, it is recognisable at first glance. A new icon was born.

Pushing the boundaries
Having become a symbol of Louis Vuitton’s watch collection over the years, the Tambour has seen different expressions over time, all the while staying true to the Maison’s DNA: a devotion to the Art of Travel and bold creativity that combines technological innovation with exceptional craftsmanship. With the Tambour Spin Time in 2009, it even reinvented how time is displayed, with rotating cubes instead of hands and hour-markers. In 2011, La Fabrique du Temps in Geneva and its master watchmakers, Michel Navas and Enrico Barbasini, joined Louis Vuitton’s adventure to create some truly exceptional timepieces.

Launched in 2014, the Tambour Evolution bore strong, masculine lines with its 45mm diameter case, whereas the 2016 Tambour Slim, in a Tourbillon version, appeared sleek and discreet. on the wrist. With the Tambour Moon model launched in 2017, the Tambour kept its signature round case while reversing its caseband’s curve. Then, in 2020, the Tambour Curve quite literally pushed the boundaries of timekeeping, with its titanium and Carbostratum case, its surprisingly elongated convex curve and its phenomenal flying tourbillon calibre, stamped with the prestigious Hallmark of Geneva (Poinçon de Genève) – a perfect match between a high-complication movement and bold creativity.

In 2021, the Tambour Carpe Diem received the Audacity Prize at the Grand Prix d’Horlo-gerie de Genève, while the Tambour Street won the Diver’s Watch Prize.

Louis Vuitton’s watchmaking has also been closely linked to the connected watch. With this technology, the future is now. In 2022, the Maison has already unveiled the third generation of its Tambour Horizon Light Up model. This connected watch is simply revolutionary. Not only is it bright, travel-friendly and playful, but it is also entirely customisable, thus staying true to the brand’s DNA.

A Twenty for twenty years
In just two decades, Louis Vuitton has proven its legitimacy on the watchmaking scene. Over the years, the Tambour’s timeless and iconic stylistic signature has combined with all kinds of watches, from the more classic types to the most complex movements. Depending on the wearer’s wishes, it has been masculine, feminine, GMT, diver-friendly, and has even equipped itself with a flying tourbillon and a minute repeater, bearing witness to the high-end watchmaking expertise of Louis Vuitton’s artisans. To celebrate the watch that made all of this possible – the iconic Tambour –, La Fabrique du Temps Louis Vuitton has created an exclusive anniversary model: the Tambour Twenty. The limited edition of 200 pieces pays tribute to the original Tambour by reprising the iconic codes that made it an icon of watchmaking design.

Watch enthusiasts will recognise all the features that made the Tambour’s design so unique. While this limited edition is a true concentrated blend of everything that made this watch stand out, it also boasts brand-new features that will set it apart for collectors.

The Tambour Twenty boasts the same unique and instantly recognisable case, a nod to the watch’s tambour component which, in English, is known as the “drum”. The timepiece stands out with its deep, flared shape, which gives it a robust and reliable feel. On its iconic 41.5mm diameter case are the 12 letters composing the name “Louis Vuitton” across the numbers and hour-markers, just like on the 2002 version. This collector’s edition also features a brown sun-brushed dial, along which the chronograph’s long yellow hand glides - a nod to the thread historically used in leatherwork. The two elegant sub-dials also make a comeback.

The Tambour Twenty, which is water-resistant to 100 metres, keeps time with a LV277 high-frequency movement based on the iconic Zenith El Primero, the first automatic chronograph ever. This movement with a 22-carat gold rotor and 50 hours of power reserve is exact to the tenth of a second. A true collector’s item produced in a 200-piece limited series – as specified by its engraved caseback – the Tambour Twenty is also available with another iconic Louis Vuitton staple: a miniature trunk in Monogram canvas. In tribute to Louis Vuitton’s travel legacy, clients can continue to protect their most precious belongings in cases that will stand the test of time.

Said time, however, is not likely to have passed before Louis Vuitton’s legitimacy as a watchmaker is well and truly established...