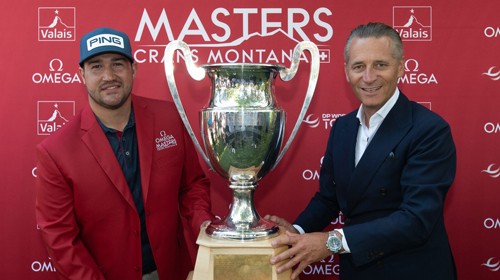 As a sport of precision, excellence and style, golf has become a vital part of Omega’s identity and the brand is committed to supporting the game around the world. Thanks to its concerted efforts and dedicated partnerships in recent years, the brand’s name is now firmly associated with some of the sport’s best players.

The Omega Masters (25-28 August 2022) is one of the most prestigious golf competitions held on European soil – and certainly one of the most breath-taking. Originally called the Swiss Open when it was founded in 1923, the tournament’s mountain venue in Crans-Montana has remained the same since 1939, making it the oldest golf tournament in Europe to be played on the same course every year. During its illustrious history, the high-altitude competition has been won by notable players including Ernie Els, Sergio Garcia, Seve Ballesteros, and Nick Faldo. The watchmaker has served as the title sponsor of the competition since 2001.

The 2022 edition of the tournament was another spectacular event, attracting some of the world’s most talented players to the mountain greens. Appearing at this year’s Omega Masters were several of the brand’s own ambassadors, like Guido Migliozzi and Sean Crocker. In addition to attracting the game’s top pro players, the event is a popular event for golf-loving celebrities. The long list of big-name big-hitters at previous tournaments includes Cindy Crawford, Michael Phelps, Tom Felton and Justin Timberlake.