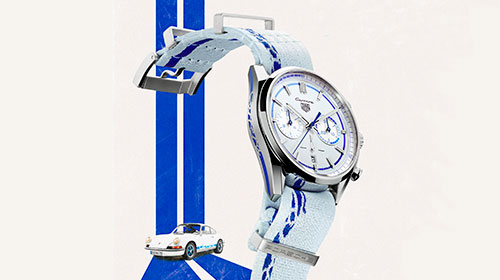 In 2021, TAG Heuer and Porsche entered into a global partnership that celebrates their brands’ shared history and values. They are once again joining creative forces with the fourth instalment of their collaborative product design, releasing two new limited-edition timepieces in tribute to one of Porsche’s most iconic models and the first 911 to bear the Carrera name: the Porsche 911 Carrera RS 2.7, which is celebrating its 50th anniversary in 2022.

To mark the occasion, two distinctive TAG Heuer Carrera x Porsche Limited Editions are being introduced, showcasing the signature features that have made both the 1972 sports car and the 1963 chronograph timeless objects of desire.

Revealed on 5 October 1972 at the Paris Motor Show, the emblematic model is still immensely popular among collectors as an iconic sports car that, much like the TAG Heuer Carrera, blended racing spirit, performance and elegance in a new way.

Designed for racing and rallying, the Carrera RS was the first Porsche 911 dedicated to motorsports and nicknamed “Carrera” – a name that struck Jack Heuer’s imagination when he first heard about the Carrera Panamericana.

The Porsche 911 Carrera RS 2.7 was produced in a range of 27 vivid colors evoking the 1970s, two of which were selected for the TAG Heuer tribute watches: red and blue. The colors stood out on some of the car’s unique and unmistakable features: the bold five-spoke rims, the Carrera and Porsche logos on the body panels, as well as the famous solid line down the side of the car. In contrast, the rest of the body was bright white.

The same two-tone aesthetic was applied to the limited-edition watches. They are based on the 42-mm TAG Heuer Carrera Chronograph with its elegant tricompax layout, minutes and hours chronograph counters at 3 and 9 o’clock, and a permanent seconds indicator and date window at 6 o’clock. Similar to the powerful Porsche 911 Carrera, TAG Heuer has equipped its chronograph with its most advanced movement, the in-house manufactured Calibre Heuer 02, with a power reserve of 80 hours. Visible though the sapphire crystal case back, the movement’s oscillating weight is customised to represent Porsche’s three-spoke steering wheel and bears the two partners’ logos side by side.

The blue edition is issued in a 500-piece limited edition. The finely polished steel case, rhodium-plated indexes and hours and minutes hands recall the car’s chrome door handles, mirrors and window frames. The dial is made of smooth white opaline, while the two sub-counters feature an eye-catching “snailed” finish.

The red version comes in an even more limited 250-piece edition. The refined case is in 18K 5N rose gold, as are the crown, pushers, and screw-down sapphire case back.The shimmery white dial is  framed with a Guards Red circular line and features rose-gold-colored applied indexes, permanent seconds indicator, along with hours and minutes hands.