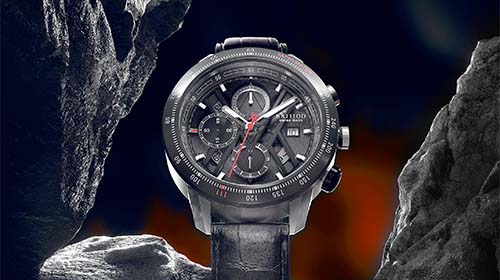 BA111OD is celebrating its third anniversary. Launched on 11 October 2019, the Neuchâtel-based start-up has succeeded in spreading its wings, despite difficulties relating to the Covid crisis, which could have stopped its take-off dead in its tracks.

For its third anniversary, the brand is unveiling the first model in its fifth chapter. After the surprise created with the launch of its tourbillon – entirely developed and produced in the canton of Neuchâtel at a never-before-seen price, moreover with the first connected crystal in the history of watchmaking – the house presents its collection’s long-awaited piece, the Chapter 51 Chrono Magma chronograph.

The result of a new collaboration between Thomas Baillod and the Senior Designer Liliane Murenzi, the racy character of the Chapter 5.1 Chrono Magma is marked by red (synonymous with power, strength and passion) and black (suggesting discipline, power, success). A fiery temperament for a model that gives pride of place to first-rate materials: the 44mm stainless steel case is embellished with a ceramic bezel whose tachymeter indications are a nod to BA111OD with the 111 indicated in red. The complexity of the four-level anthracite dial featuring a variety of colours and materials is highlighted by the Baillod family coat of arms (emblem of the brand’s logo), whose transparency partially reveals the calendar mechanism. Made of smoked glass, they echo the small seconds counter at 9 o’clock, whose hand the brand decided to replace with a rotating disk.

The transparent caseback is tinted red, to reinforce the timepiece’s uniqueness. This chronograph is powered by the automatic Valjoux 7750 movement, ensuring its durability, reliability and precision, as well as a 42-hour power reserve. Its leather strap with folding clasp is fitted with two connected chips: one serving to store your visiting card (or other file that you might want to share); and the other to provide direct access to your BA111OD store, Afluendors being able to pass on the right to acquire the brand’s watches and be rewarded for doing so.