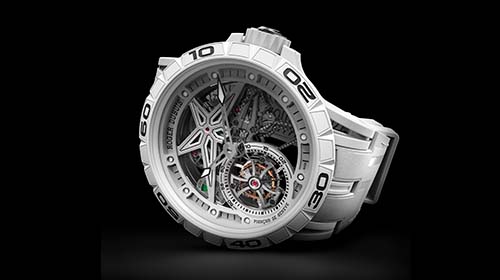 Brimming with racing codes, the latest Roger Dubuis x Pirelli creation is a roaring example of versatile design crafted with horological excellence and hyper-tech materials. Unveiled as the Singapore Grand Prix raises its starting flag, the new masterpiece is an ode to Pirelli’s 150 years of tradition, innovation and passion, embodying the result of a long-lasting relationship between a tyre performance pioneer and a serial horological innovator.

Inspired by the motorsports universe, the masterpiece not only displays the iconic Monotourbillon, but also a power reserve (60 hours) indicator at 9 o’clock that is playfully reminiscent of a car’s fuel gauge.

Knowing every minute counts on and off the track for the Roger Dubuis x Pirelli tribe, the new Excalibur Spider Pirelli MT features an interchangeable strap, crown, and bezel – all with a simple click. Just as swift changes are crucial in the world of motorsports, this Quick Release System ensures the timepiece can be switched up and customised in no time. The three additional kits in shades Oro, Silver and Red feature Pirelli’s distinctive iconic curved lines in a stylish nod to its motorsports alter ego. While these design details allow the wearer to decide what look best suits their mood, they also honour the official colours of Pirelli’s 150th anniversary.