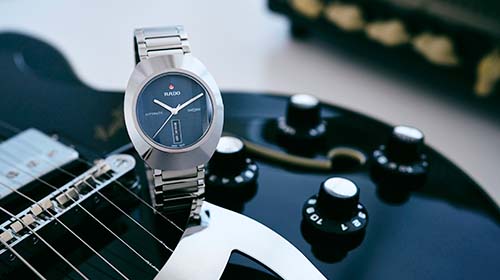 After three years of development the Rado DiaStar watch with its innovative hard metal alloy, ultra-resistant sapphire crystal and original design was presented at the 1962 Basel Fair. Its legendary design has not aged a bit and the watch brand is unveiling new anniversary models, including one created in collaboration with designer Alfredo Häberli.

The world was riding the wave of the Post-War Boom, business was thriving and the creative field of watchmaking was no exception. Rado was still called Schlup & Co and competition was lively, so the company decided to create a watch that could outlast, outshine and outlive practically every other high-quality timepiece on the market.

With that firmly in mind, the watch brand’s engineers and designers turned their attention to the materials that were going to be used for the case and the watch crystal, in the first instance. The projected timepiece would naturally have to be an outstanding example of durability and good looks, as well as capable of maintaining those qualities almost indefinitely.

Under the Rado name, they set out on their noble mission: to build a watch that would be scratch-proof and made of a tungsten carbide alloy called “hardmetal”. In that shiny, highly resistant case, they then placed a sapphire crystal almost as hard and durable as diamond. Back in the day, one may recall, a lot of watch cases were made of gold or plated brass, with a fragile glass of mineral or polymer origin, sometimes with additional detailing in delicate enamel or other finery that was quite susceptible to damage. The new case was to be almost eternal. On 28 November 1961, Rado thus officially patented the use of hardmetal alloy for watch-case manufacturing, becoming the first company to combine a hardmetal case and a sapphire crystal in a truly unique new watch featuring a bold new design. The DiaStar was born.

The research and development of the first Rado DiaStar took three years, maturing its deeply original character through a lengthy process that culminated in a press announcement in late 1961. The watch was then presented at the Mustermesse in Basel the following spring, to coincide with its simultaneous launch on the market.

The original shape of the DiaStar timepiece, a striking oddity in 1962 and one that saw no big changes throughout its various incarnations, was a true landmark that helped to establish Rado as a design-led brand. In that light, the story deserves a word or two of explanation.

Few people realize that the unique shape arose from technical constraints rather than a particular aesthetic objective. Machining such an incredibly hard alloy implied techniques that one might regard as cutting-edge in their day, but not quite what can be done nowadays with computer- and laser-assisted CNC machining systems. The watch landed its signature oval shape almost by chance but struck the intuitive vision of key Rado decision-makers who saw it, and the DiaStar found its way to market. Sixty years later, with nearly five million units sold all around the world, Rado can look back on that decision with pride, even if the early years were a soft crescendo rather than a spike to instant fame. This unique watch received recognition first in the Far East after its launch and then slowly throughout the rest of the world. Since then, the timepiece has truly become one of the most loved and iconic creations, not only at Rado but for the entire Swiss watch industry.

DiaStar Original 60-Year Anniversary Edition
Rado presents the next chapter in the success story of its flagship model by unveiling the DiaStar Original 60-Year Anniversary Edition. This one-of-a-kind timepiece was created in collaboration with Swiss designer Alfredo Häberli, who took on the challenge of revisiting the model with subtle but important changes to mark the 60th anniversary, while maintaining the strong personality of the original model and adding the latest innovations.

This tough challenge was taken on by internationally renowned designer Alfredo Häberli. The artist describes himself as a blend of Swiss precision and Latin American emotionality. In his Zurich-based studio, he conceives the reduced and the inventive, combining functionality with soul and humour. Instead of following trends, he tries to find his own solutions. Today, more than 30 years after opening his own Alfredo Häberli Design Development studio in 1991, he still realises his visions for brands such as iittala, Baufritz or Andreu World with the same level of passion, discipline and élan as on day one.

The DiaStar Original 60-Year Anniversary is topped with a radial-brushed Ceramos cap featuring polished corners and details scattered across a matching monochrome stainless steel case, as well as a hexagonal faceted sapphire crystal symbolising the six decades that have passed. The R764 automatic movement, with its 80-hour power reserve, ensures reliable and precise operation. The bracelet/strap is equipped with the EasyClip system and is available in Milanese mesh and grey fabric versions.

DiaStar Original
The DiaStar Original has been given a new look. Featuring a polished Ceramos bezel, this timepiece has a dial brushed in two directions and available in three colours: blue, dark grey and green. At 6 o’clock, the date and day of the week indication echoes the traditional Rado symbol, a mobile silver-coloured anchor on a red background. A sapphire crystal with parallel facets tops this composition beating to the rhythm of self-winding in-house Calibre R764, gold-plated and driving three hands. These models are fitted with a polished, brushed steel bracelet.